The Spinner charges a fee to "subconsciously influence" targets by exposing them to online posts "disguised as editorial content".

But Facebook has objected to the start-up using its services to achieve this.

And the tech giant has barred the firm and its chief from using Facebook or Instagram for any reason.

In response, the Spinner's co-founder and chief operating officer Elliot Shefler told the BBC that it would continue to sell targeted online campaigns and refused to rule out using Facebook in the future.

The Spinner claims to be able to "brainwash" loved ones to:

To do this, it shows dozens of articles about the issue to targets over a period of months via the internet, including in their social media feeds.

"It appears that the Spinner uses fake accounts and fake Facebook Pages to 'strategically bombard' Facebook users with advertisements," it reads. 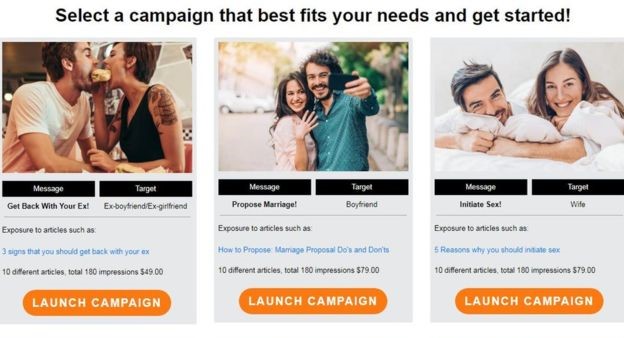 The Californian firm told the BBC that it had already removed the Spinner's accounts.

"We have no tolerance for bad actors that try to circumvent our policies and create bad experiences for people on Facebook," a spokesman said.

Mr Shefler pointed out that the Spinner had bought advertising slots on Facebook for more than a year, and each of its ads had been reviewed and approved.

Facebook uses both humans and automated software to vet ads submitted via its self-service tools.

But Mr Shefler added: "The Spinner's ability to deliver content to targeted users is not dependent on any specific social account or page. It's a concept."

The Spinner operates by sending a link to the target's phone. When opened, it places a small file known as a cookie on the target's device, which allows them to be identified and exposed to specially created articles and other media.

The idea was originally pitched to the public via the crowdfunding site Indiegogo, but only raised £192 of its £47,800 target. Despite this, the firm decided to press on.

But some have questioned whether its methods work.

Rich Leigh, who works in public relations, put it to the test.

He bought a campaign that supposedly encouraged women to want more sex. But instead of sending the link to a friend or loved one, he delivered the campaign to himself.

A few months later, his Facebook feed began to show sponsored posts featuring articles with headlines such as 9 Ways To Initiate Sex.

But he says he only saw only four or five examples. He also reported seeing ads from a campaign he did not purchase, encouraging him to stop riding motorcycles.

"This is not a technical hack," he said.

Mr Shefler did not refer the BBC to any customers who had previously bought campaigns.

One critic said that while many people might find the Spinner's tactics objectionable, the tracking techniques commonly used by other advertising companies were arguably worse.

"By getting outraged at obvious stuff that the Spinner does, we tend to overlook its true significance," said Doc Searls, author of the The Intention Economy.

"It exemplifies the methods and purposes of the entire online surveillance economy, and the participation of most publishers in that same economy."

Yves Maitre, CEO of HTC did not clarify on whether it will release single 5G phone or multiple phones.

Google has warned people not to circumvent the ban on Google apps that affects newer Huawei phones.

Nadella emphasised the need for businesses to build their own technology at a time digital services are transforming all industries, and even homes.

The bill aims to fight child sexual abuse material on Facebook and Google's by making them liable for prosecution.