AirTags, although designed to act as key, wallet and luggage finders, have been misused by thieves and stalkers to track people's locations, as well as their personal items, without their knowledge. Over the last year, Apple has released several anti-stalking features to help people find rogue AirTags near them, and that includes an app for Android users.

Tracker Detect, an official Apple app on the Google Play Store, allows people who don't own any Apple devices to scan for nearby AirTags, in case someone is using the tracking device to follow them around. Here's how to scan for AirTags on your Android smartphone or tablet. 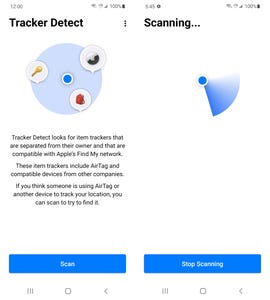 Just hit Scan and search for nearby AirTags.

Use Tracker Detect on Android to scan for AirTags

The Tracker Detect app, available in the Google Play Store for free, allows you to use your Android to search for and track items that work with Apple's Find My network, such as AirTags, and are separated from their owner for at least 15 minutes. No Apple ID account is required.

After downloading Tracker Detect, turn on Bluetooth, open the application, agree to the terms and conditions, and tap the blue Scan button to search for nearby items. If this is your first time using Tracker Detect, you'll be prompted to give the app access to Bluetooth, which it needs to find any AirTags.

Your Android will scan for up to a minute, and if it finds an AirTag near you, it will appear as "Unknown Airtag." If you don't find anything, you can try the scan again, especially because the tracker must be separated from its owner for at least 15 minutes to appear.

What to do if you find an AirTag tracking you

If Tracker Detect notices an AirTag that's been following you for at least 10 minutes, the app will then allow you to play a sound from the AirTag so that you can more easily find the physical tracker.

If you do find the AirTag, it's up to you on how you want to proceed. If the AirTag is with you by accident, meaning it's not being used to follow you, and "Lost Mode" is enabled, you can tap and hold your NFC-compatible Android to the white side of the tag to get more information on how to return it.

However, if the AirTag is being used to track you, you can also view the serial number by tapping it with your phone, which might prove useful if you're considering contacting law enforcement and require ID proof of who might be stalking you. You can also take the back cover apart and look inside the AirTag to find the serial number. 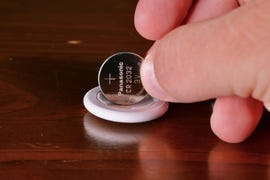 The AirTag can be disabled by removing the CR2032 battery.

How to disable an AirTag

If you want to shut down the AirTag and stop if from tracking you, Tracker Detect will provide a brief but concise summary on how to disable it:

Removing the battery will notify the owner that the AirTag has been disabled, so be warned.

Unfortunately, Tracker Detect lacks some of features that are available natively on the iPhone -- most importantly, automatic background scans. On Tracker Detect, you must manually scan for AirTags each time, which can be a nuisance if you're constantly worried about being tracked.

Maybe in future updates Apple will consider adding more features to the Android app, but until then, Tracker Detect can help provide some relief if you're being tracked by AirTag.

If you're considering purchasing an Apple tracking device, despite the privacy concerns, learn more about AirTags, check out some of the best AirTag accessories out there and read about how AirTags fare against their biggest competitors.