HMD Global might not have had a standout Nokia smartphone in a while, in my opinion, but there's no denying that most of its Android phones to date have looked really good. Today, we'll be reviewing the company's most recent entry-level Android offering, the Nokia C3. This budget phone features a simple design and basic specifications, but hopefully, that should be enough to offer a decent Android experience.

This phone seems quite affordable, with a starting price of Rs. 7,499. It's time to see if the Nokia C3 is worth buying.

If the Nokia name wasn't enough nostalgia, the removable battery in the Nokia C3 should definitely bring back some memories. The entire back shell is a single piece of plastic which comes off so you can install the battery, SIM cards, and a microSD card. There are two slots for Nano-SIM cards, so you won't need any adapters. I have the Sand colour, which I think looks very nice. This phone is also available in Nordic Blue. It's not too thick at 8.69mm and weighs a comfortable 184.5g.

The Nokia C3 looks elegant, thanks to the minimalistic back which only has a tiny vertical camera module and a fingerprint sensor. The back panel doesn't attract fingerprints, and offers good grip. The volume and power buttons are to the right, while the dedicated Google Assistant button is placed on the left. There's a headphone jack on the top and a Micro-USB port at the bottom. There's no cutout for a speaker, and that's because the Nokia C3 uses its earpiece as the loudspeaker. 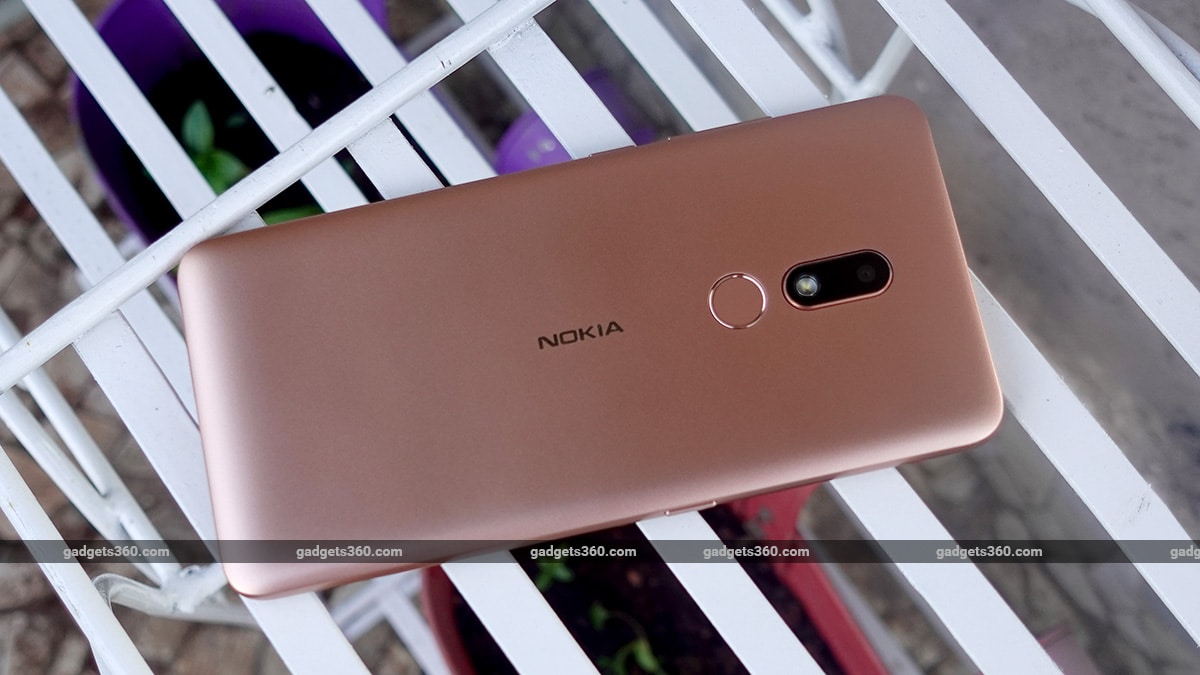 Coming to the front of the phone, there is a 5.99-inch HD+ IPS display with toughened glass. The design of the front also feels nostalgic, but honestly, this is something that's best forgotten. Instead of a notch, the Nokia C3 has thick, old-fashioned borders on the top and bottom, and relatively narrower ones to the sides. This isn't a big complaint for an entry-level phone, but considering that its peers have also moved on to more modern designs, I think HDM Global could have done better.

The box contents are pretty basic. You get a 5W charger, a USB cable, and a quick-start guide. There's no case or headset.

The Nokia C3 is powered by a Unisoc (formerly known as Spreadtrum) SC9863A octa-core SoC. It consists of eight ARM Cortex-A55 CPU cores running at up to 1.6GHz. It's built on a rather old 28nm fabrication process, which might not be as power-efficient as what some of the newer SoCs from MediaTek and Qualcomm use.

Other features include Wi-Fi n, Bluetooth 4.2 and FM radio. The latter requires a headset to be connected in order to work. The Nokia C3 supports 4G VoLTE and GPS. It has some basic sensors such as a proximity sensor, ambient light sensor and an accelerometer. There's no gyroscope and compass unfortunately, which means you can't see the direction you're facing in apps like Google Maps. 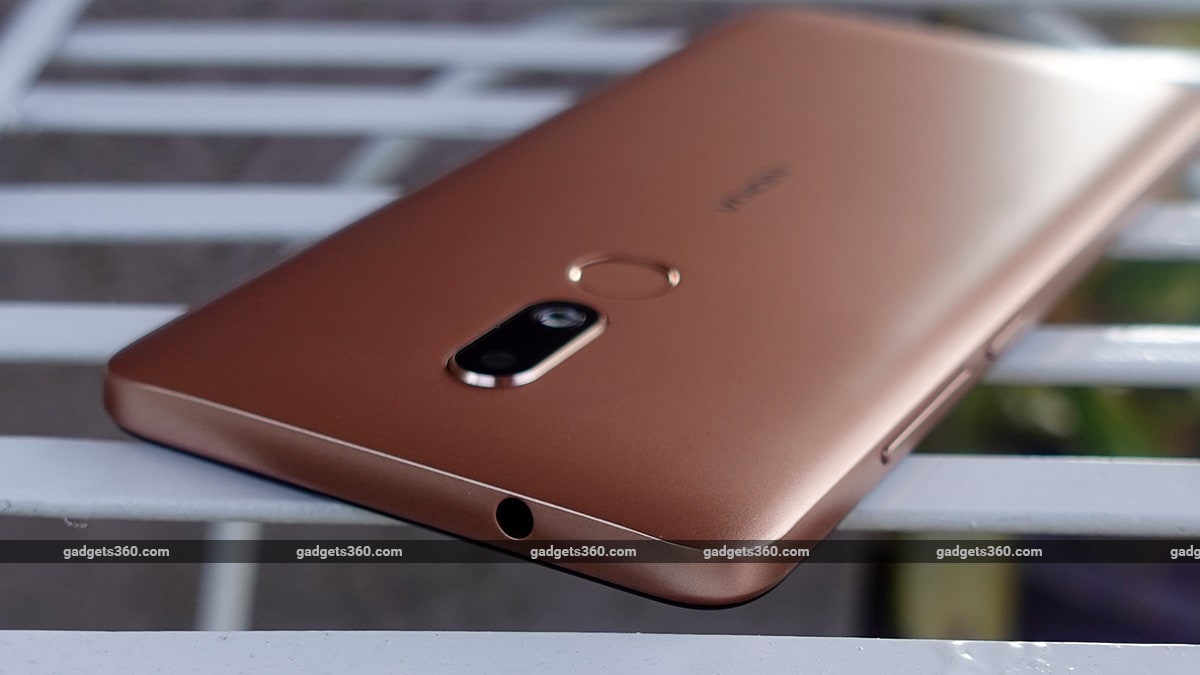 The Nokia C3 has a headphone jack on the top

The Nokia C3 runs stock Android 10 with just the basic apps from Google preinstalled. The only third-party app is called My Phone from HMD Global, and it's for after-sales support and device maintenance. You get some basic gestures in the Settings app, but that's the extent of the customisation. The Google Assistant button should be handy if you are an avid user of Google's virtual assistant. It can't be remapped to launch any other app or function though. The C3 is not part of Google's Android One program, so you don't get that guarantee of two years of software updates. However, at least it's not running Android 10 (Go Edition) like the Nokia 1 (Review).

Using Android on the Nokia C3 was a decent experience, but even with 3GB of RAM and bone-stock Android, it wasn't the smoothest. Animations and multitasking caused some intermittent stutter and lag. The fingerprint sensor worked well, but the screen took a little longer than usual to wake up. Face recognition was also slow to kick in and perform authentication. Gaming performance wasn't great either. Simple titles such as Sky Force Reloaded ran okay, but anything heavier really struggled to run well or deliver good graphics.

This lack of performance is visible in benchmarks too. I got a decent AnTuTu score of 1,06,338 points, which was on par with what the MediaTek Helio G35 SoC can deliver, as seen in our reviews of the Redmi 9 (Review) and Realme C12 (Review). However, the graphics scores were quite a bit lower. The Nokia C3 managed just 26fps in GFXBench's T-Rex test. The display gets adequately bright and videos don't look too bad on it. The earpiece speaker gets particularly loud as it faces you directly and there's little to no chance of it being blocked by your palm. 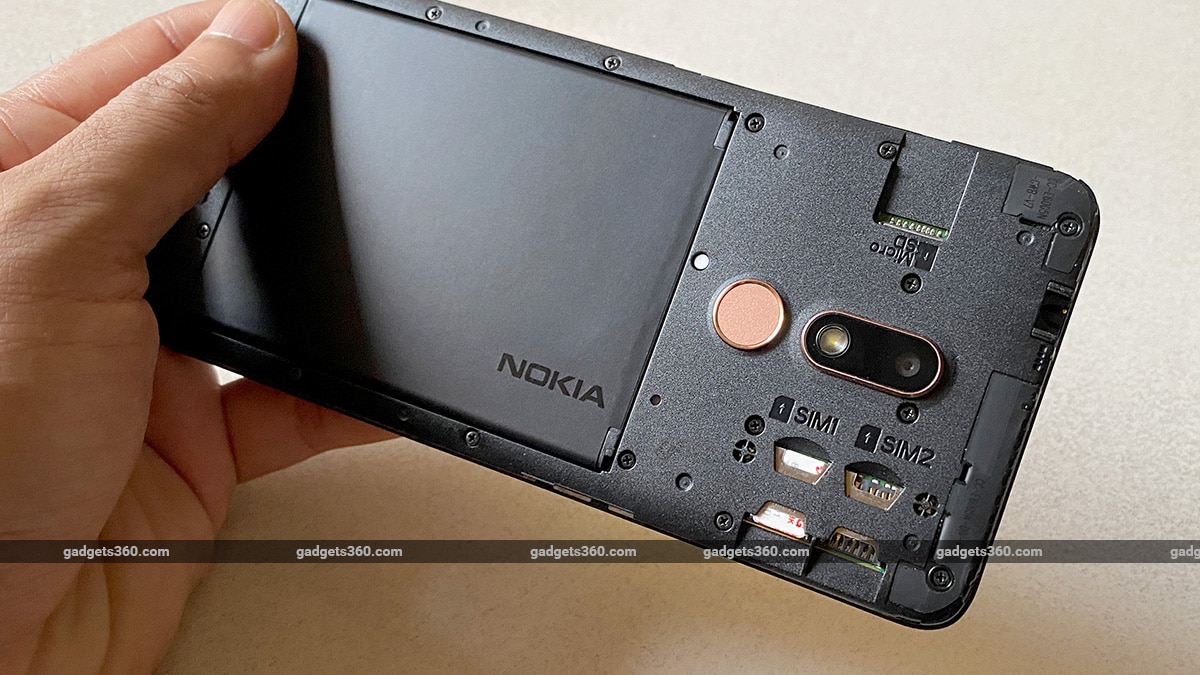 The Nokia C3 has a removable battery

The Nokia C3 doesn't have a very large battery, coming in at 3,040mAh in capacity. It performed very poorly in our HD video loop test, lasting for just 7 hours and 34 minutes, which is one of the lowest times we've recorded in a while. With medium to light use, I was able to get just about a full day of battery life, but watching videos or gaming drains the battery quickly. Charging the battery isn't very speedy. You only get a 5W power adapter in the box, and even when connected to a faster charger, I was only able to charge the battery up to about 43 percent in an hour.

The Nokia C3 has a single 8-megapixel rear camera and a 5-megapixel selfie camera. Autofocus is generally on the slower side and gets worse in low light. The app offers basic shooting modes but some common ones such as Portrait mode, are missing. There is an auto-HDR function, which is nice to see. 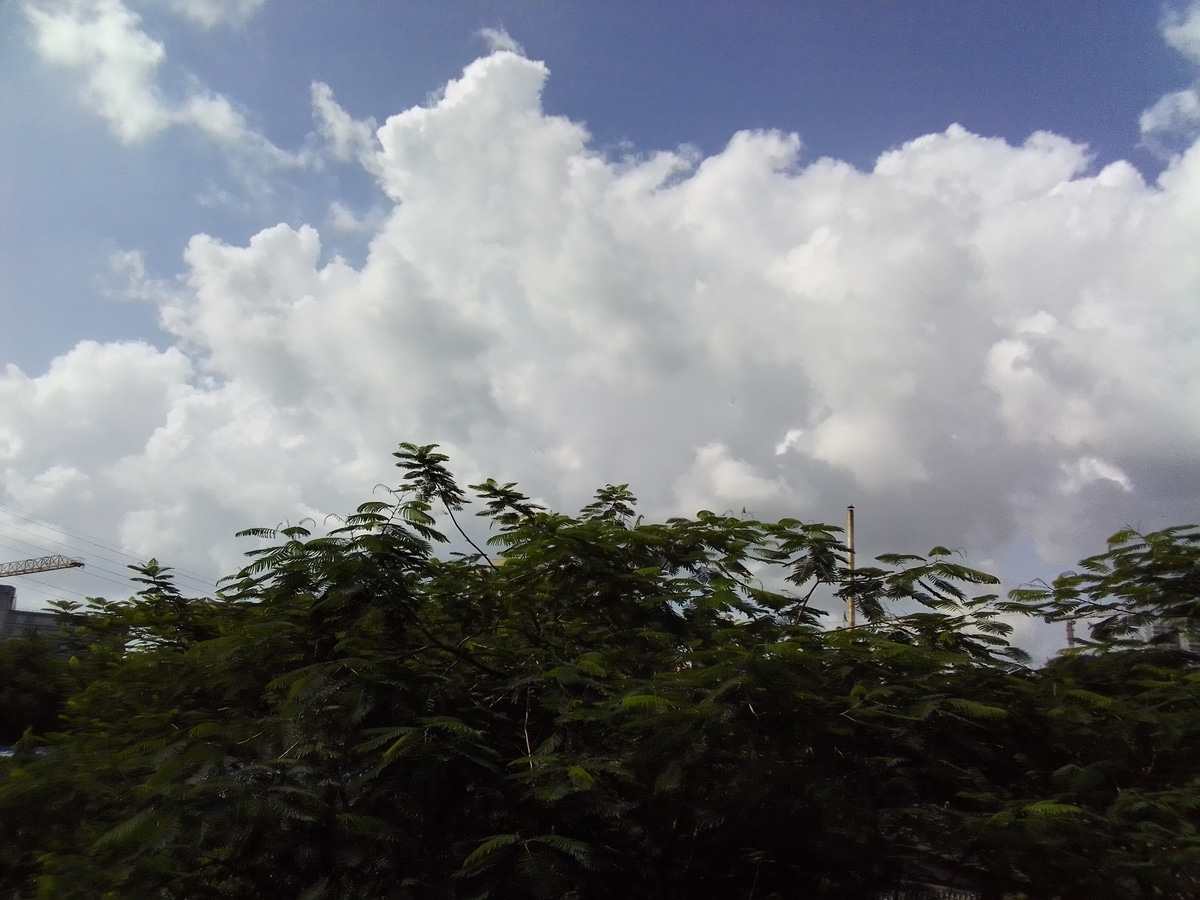 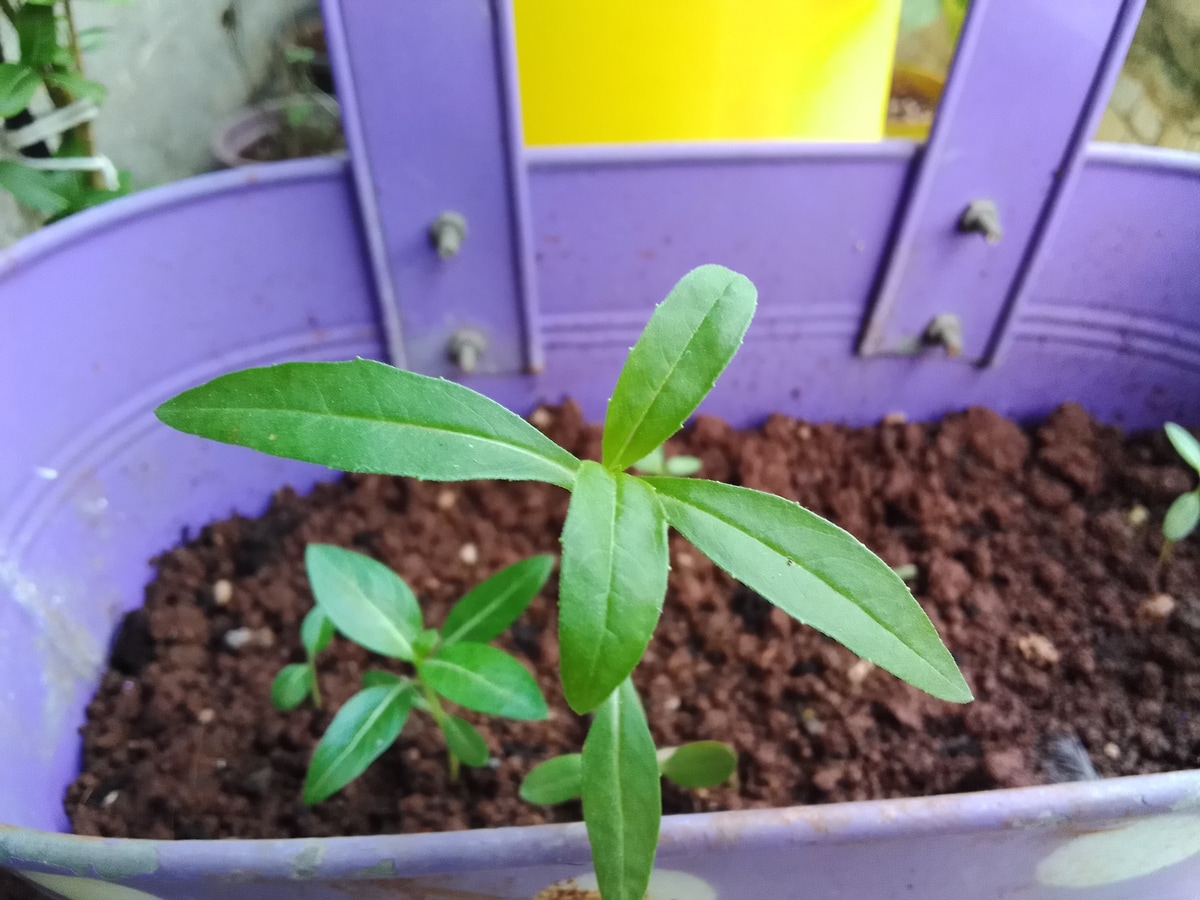 Unfortunately image quality is quite underwhelming, even in daylight. I found the dynamic range to be very weak, with most landscape shots exhibiting poor details and exposures. Close-ups were a bit better, but again, textures generally looked flat and smoothened-out. Low-light images turned out grainy with poor detail. 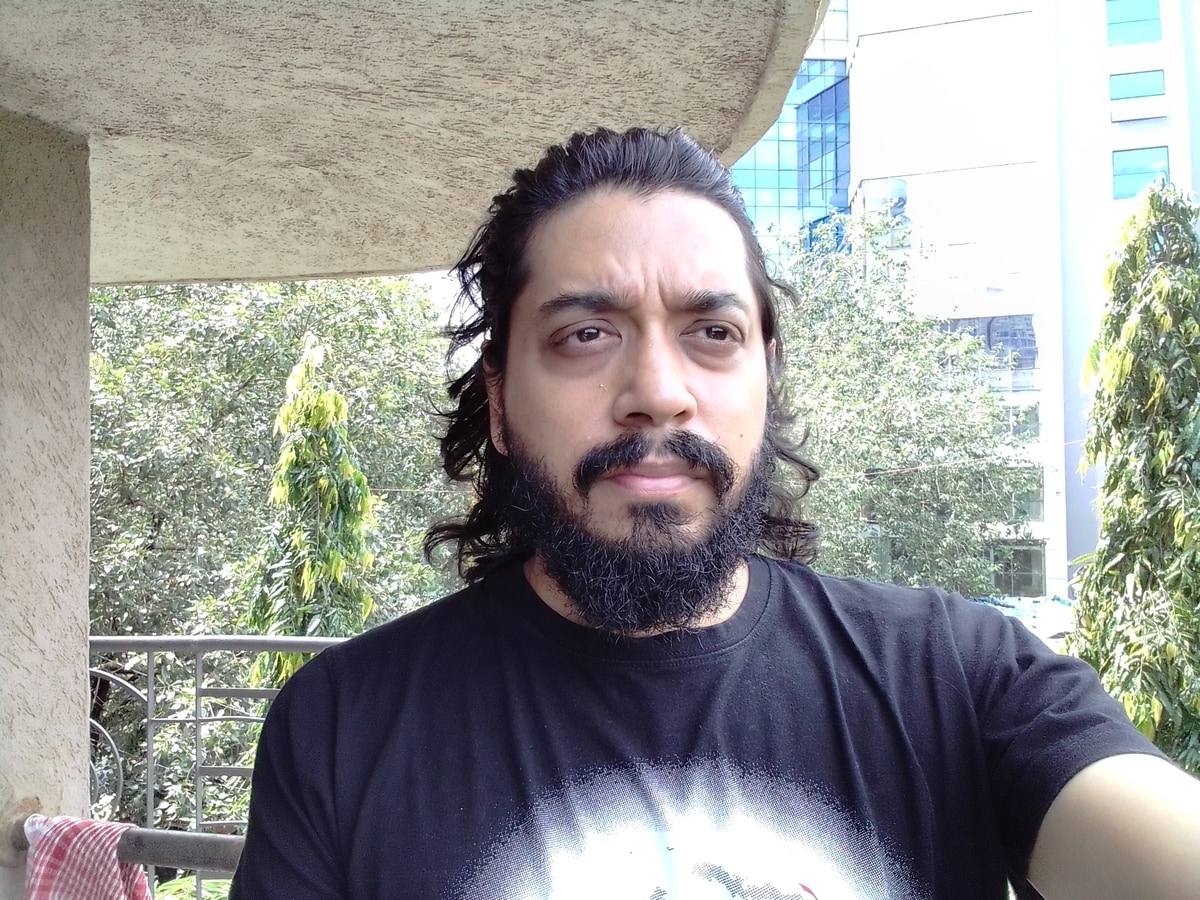 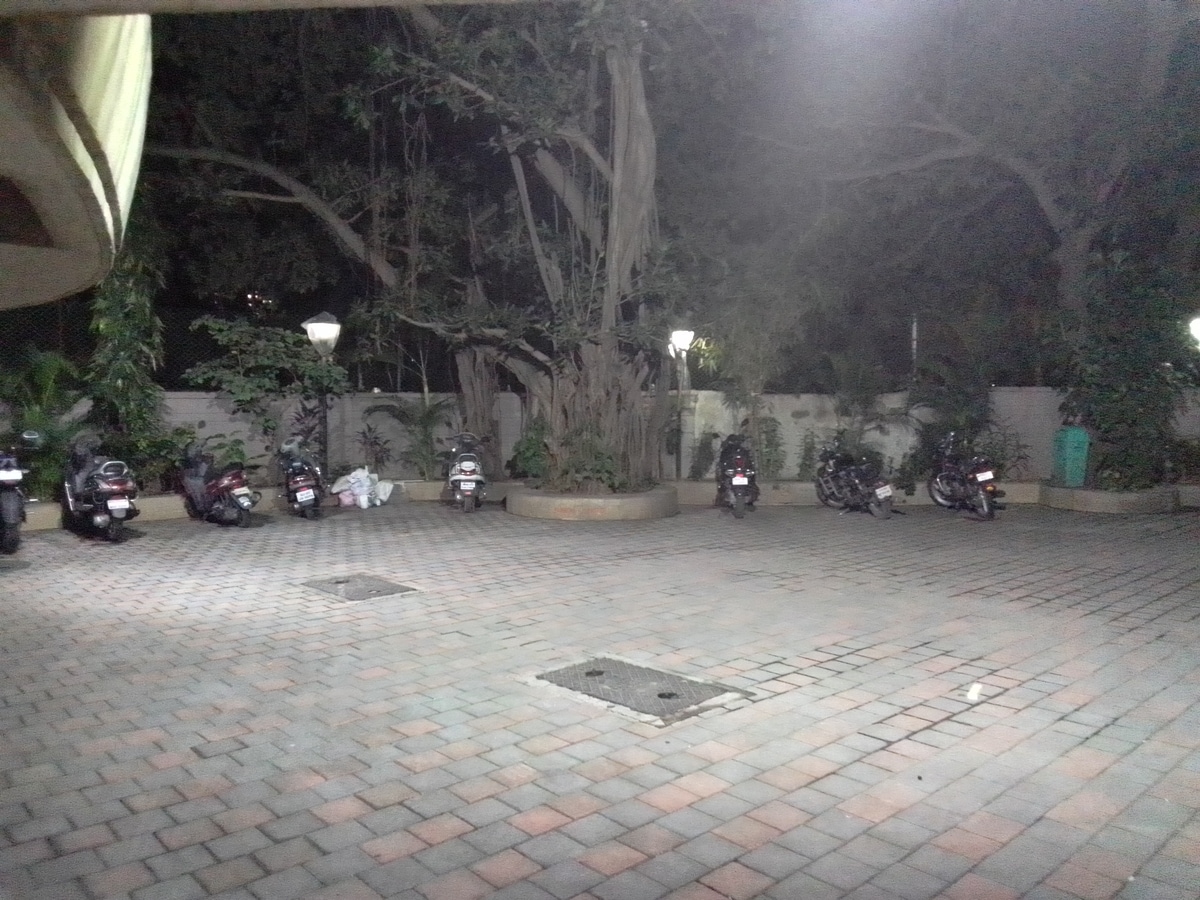 Selfies generally had weak detail too, and exposure was all over the place when shooting during the day. In low light, most selfies were grainy and almost unusable. The Nokia C3 can shoot up to 1080p video, but I found the quality to be below average, even during the day. Autofocus was also quite sluggish.

Overall, the cameras on the Nokia C3 are very disappointing, and simply not good enough, even for casual photography.

Verdict: Should you buy the Nokia C3?

I think it's pretty apparent by now that the Nokia C3 doesn't offer the best value for money, especially the 3GB variant that's priced at Rs. 8,999. I think the Realme Narzo 10A (Review) or even the Narzo 20A, which we're currently testing, would be much better alternatives. Apart from decent build quality and a clean Android experience, the Nokia C3 doesn't have enough going in its favour to justify this price. The performance is middling, battery life is weak, cameras aren't good, and it looks a bit old-fashioned.

If you're on a tight budget, the Realme C11 (Review) should be a better pick at Rs. 7,499. You lose the fingerprint sensor and performance is more or less similar to that of the C3, but at least you'll be getting much better battery life.

Will Xbox Series S, PS5 Digital Edition fail in India? We discussed this on Orbital, our weekly technology podcast, which you can subscribe to via Apple Podcasts, Google Podcasts, or RSS, download the episode, or just hit the play button below.